Now that we have gotten that out of the way, follow the steps below to learn how to embed your video: 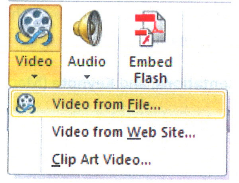