If you work with large Excel workbooks that contain multiple tables, it can become very tedious moving from one to the other. This is a quick and easy way to do just that and I think you will love it.

Told you that you’d love it!

Can you believe it is November??? Well you better believe it.  How could you not?  I mean the television is showing Christmas and holiday advertisements and I heard Christmas Carols on the radio today!!!  Could we please just have Thanksgiving first??

We have gone from temperate weather to frosts and freezing ! Holy cow! I do detest being cold even though I enjoy the change of seasons.

I hope you enjoy the articles this month as much as I enjoyed writing them for you. Please remember those less fortunate than yourselves during these cold months.

And please remember to let those you care for know that you do.  You have no idea how this can change someone’s outlook. Smile at as many folks as you can too.  It will make then smile back at you and then you will both fee good!

Until next time, take care of you!

Excel is very flexible in how it will allow you to set up custom formats for displaying all manner of values. Most custom formats are straightforward and easy to figure out, once you have an understanding of how custom formats work.

The solution is to use your numeric keypad to enter the desired line break in the format. 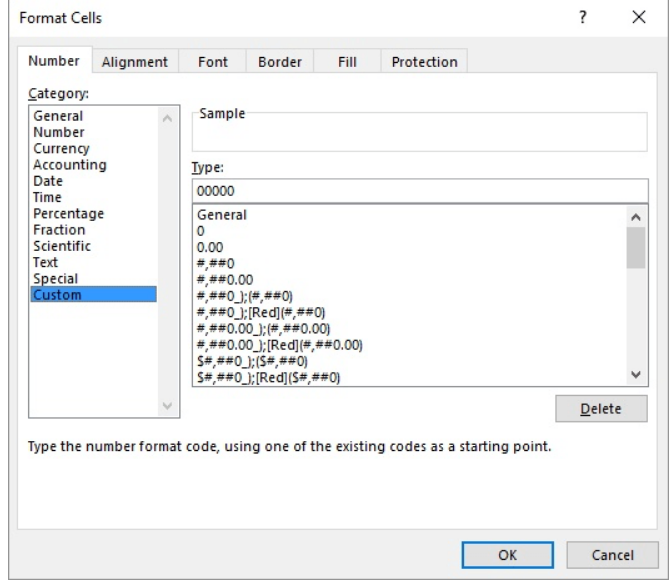 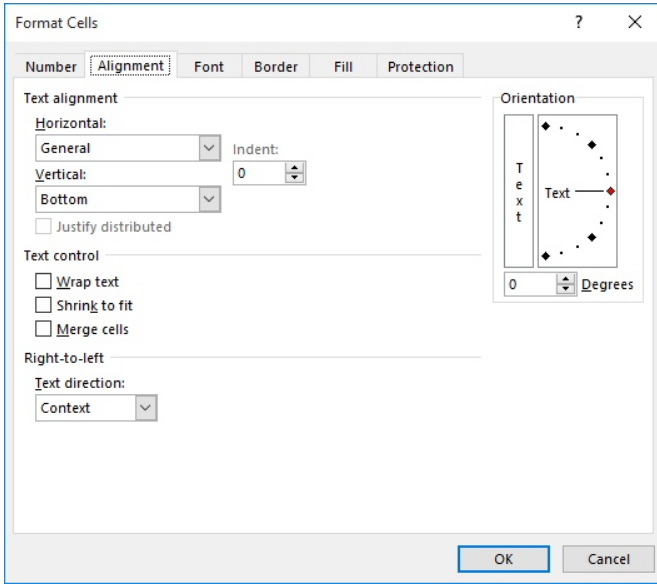 After setting up the format in this way, you will need to adjust the row height of the formatted cells so that the entire two lines of the date will display.

Working with tables in your Word document can seem complicated at times depending on what you are trying to accomplish.

If, for example, you are trying to create a form, merging cells is a common activity you might employ.

Follows the steps below to learn how: 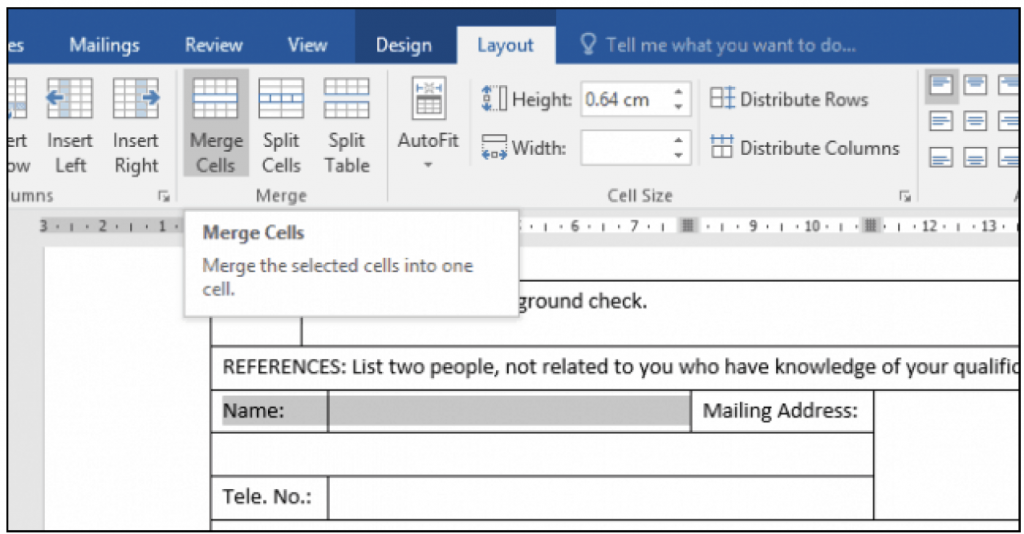 My friends, it does not get any easier than this!

One of my subscribers uses Acrobat InDesign more than she uses Word, and some of the differences between the two are very frustrating to her. For instance, in InDesign, she can use Find and Replace to replace without automatically moving to the next occurrence of what she is finding. This allows her to visually look at the replacement just made to make sure there are no problems. In Word, when she clicks Replace in the Find and Replace dialog box, Word will make the replacement, but automatically finds the next occurrence. So, if she wants to check what was just done, she has to go back to find the replacement point. This is very frustrating for her, so she wondered if there is a way to make Word not do the next find after he clicks on Replace.

Unfortunately, there is no setting or method to do this in Word; the behavior is native to InDesign, but not to Word. There is a workaround, which might allow you to accomplish what this but, at best, this can be very klutzy.

This will bring you to the next suggested replacement, where you can continue moving forward.

I just read an article about a user who was revising a long list of styles in a template and came across the Hide Until Used feature in the Recommend tab of the Manage Styles dialog box. If she marks a style as hidden, it does not show up in the list of styles, so how do we use it??

Using styles within a template is a great tool for creating consistent formatting in one or more documents. The styles list can become long, however, and you might not need to use every style in every one of your documents. The Hide Until Used option is located in the Recommend tab in the Manage Styles dialog box that is in the Styles Window. I think most folks can access this using the key combination shortcut Ctrl+Alt+Shift+S. In mine that key combination is being used by an add on called DataPrompter.

Hide Until Used allows you to hide any style that is not being used at the current time. This option makes it easier to manage the formatting of a project without deleting a style that will be used in a future document.

If you hide a style and later discover that you need to use it, just go back to the Style Pane Options dialog box, select the style that you would like to use and click on Show. 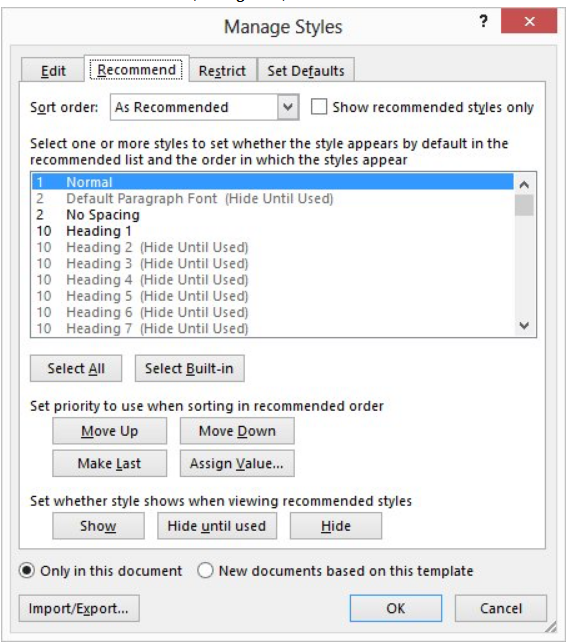 Word will now display the styles list in the Styles task pane based on your selections. If you would later like to see the style you just hid so that you can use it, follow the steps below: 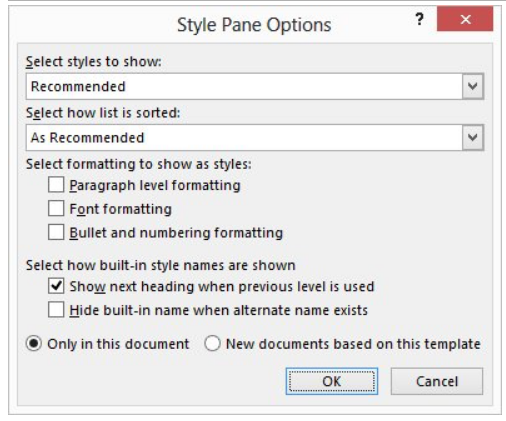 The styles that you previous marked as Hide Until Used will now show up in your Styles task pane and can be applied in your document, as you like. Once the style is used in the document, even if you go back and change what is shown in the task pane, the Hide Until Used style, since it is now used, will appear.

Many of my subscribers lament the fact that WordPerfect used to have Block Protect wherein you would highlight a block of your text and protect it so that it would always appear on the same page.

Well guess what? You can do that in Word also! Is it that simple? Well I suppose you could say no, because Word actually has TWO different versions of Block Protect:

Follow the steps below to learn how to find and use these: 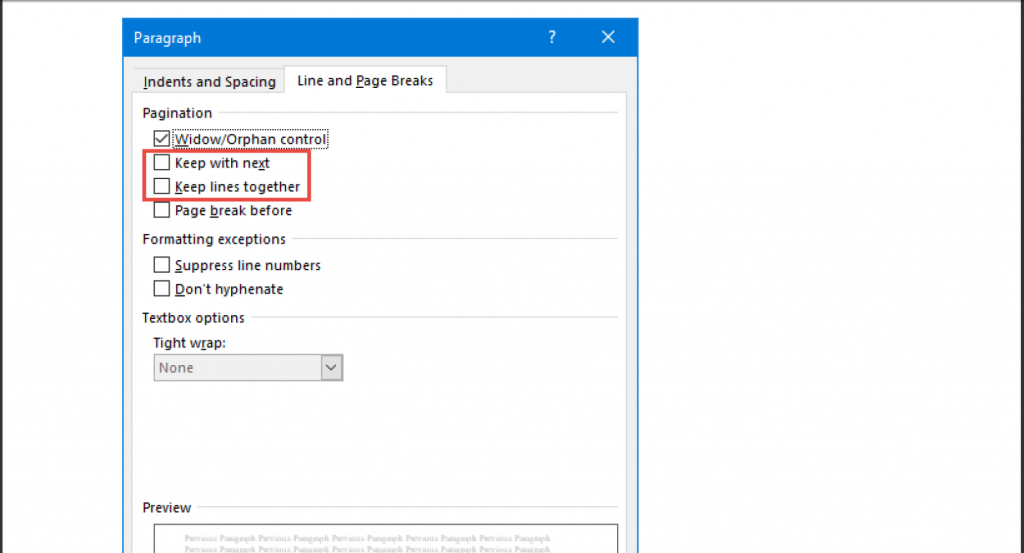 You can now select one or both of these options.  What is the difference you might ask? See below.

Keep With Next will keep two or more lines of a single paragraph together (i.e., it will keep a block of text that does not have a hard return or a line break within the block all on one page).

Keep Lines Together will keep lines from separate paragraphs together on a single page (i.e., a heading  and the first few lines of your paragraph). This is for a block of text that has one or more hard returns or line breaks or line breaks in the middle of it.

If you cannot decide which you need, you can always use both and it will still work for you. Just do not try to block protect very large blocks of text or you will run into problems.

If you would like your Outlook calendar to include all the public holidays, you do not have to Google them and  insert each and every one of them individually into your calendar.

Outlook can automatically add them to your calendar for you! And there are almost 100 different locations to select from. So if you would like the public holidays of Nicaragua or Down Under, simply select that box and they will appear in your calendar. 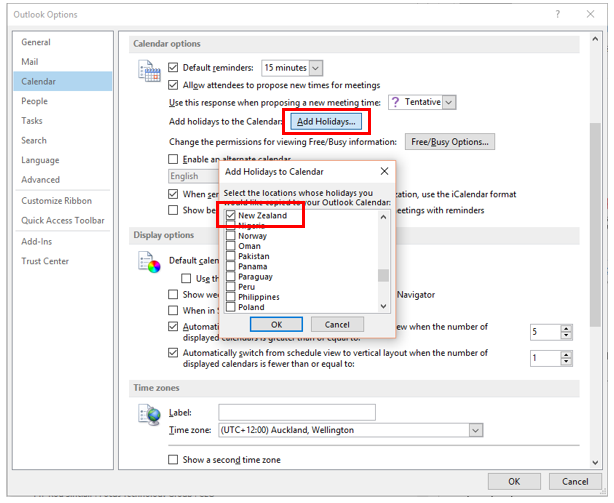 These are added as All Day Events, so you can set reminders or apply colors if you like.

Have you ever had Word all of a sudden change your text to foreign lettering? For example, without warning when you key in the question mark you will get an “e” with an accent, and the “~” (tilde) produces a “.#” All of the keys seem to be remapped to the foreign language and you do not  understand why. You may discovered that the only way to stop it is to close your document and then re-open it.

Most likely, this problem will need to be addressed in both your operating system and in Word. Windows systems can have multiple language configurations installed on them. For instance, it is not unusual to have both English and French installed on a given system.  This could occur when the user is in a country—such as Canada—that has two dominant languages.

When there are multiple languages installed in the operating system, the system provides a way to easily switch between the languages. On most systems this is done by pressing Alt+Shift. If you press this shortcut inadvertently, you can find yourself typing in a language you did not intend. The solution is to repeat the shortcut so that you return to the language configuration you want to use.

You should note, however, that the Alt+Shift shortcut may not work on all systems. For some language combinations Windows may use a different shortcut such as Ctrl+Spacebar, and it is possible that a different shortcut than these was specified by a previous user of your system. The shortcut can be modified in the Control Panel under the heading of regional and language options.

In Word, you may want to check whether the program is configured to automatically detect languages or not. If it is, then it is possible that the language switching is occurring because of the words you are typing within your document. You can check this configuration setting in Word 2007 by following these steps: 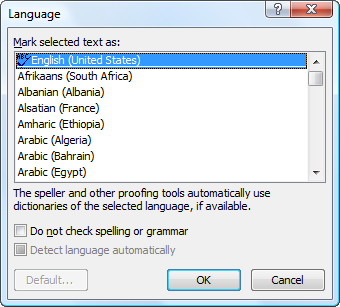 If you’re using Word 2010 or Word 2013, the steps have been changed slightly, but the result will be the same. In order to check the configuration setting in Word 2010 and Word 2013, follow these steps: 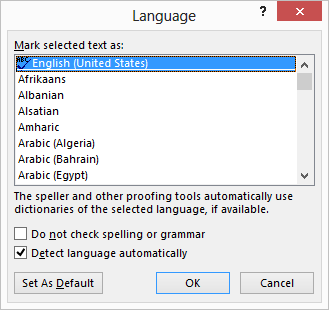 When you make the language setting change in Word, it is only applicable to the document or template that you are working in. If you would like the change to be applicable to all your future documents, you should open your Normal template before making the change and then save the template once the change is made.