Once a font is designed, a certain amount of space is designated for inter-character spacing. This spacing determines how close adjacent characters will be to each other. Unfortunately, not all characters will appear the same width when read on a printed page. Depending on the characters, this may cause an illusion that characters are spaced too far apart, when in reality they follow the standard spacing conventions for the typeface. This problem normally appears when the left character in a pair has a stroke (a line) that travels diagonally from left to right.

Kerning is the typographical term that describes the process of moving letters closer together, in an effort to overcome the illusion of too much space between letters. This makes the text more readable and aesthetically appealing. In Word, kerning can be adjusted both  automatically and manually. 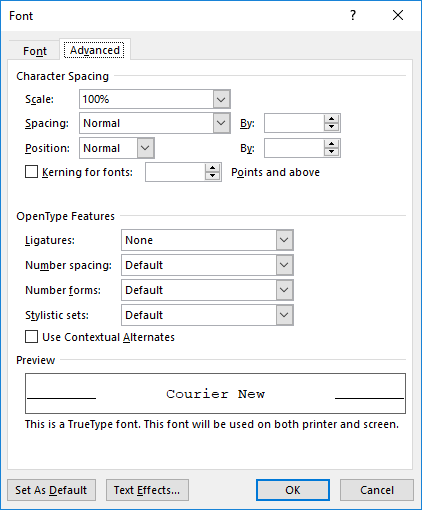 In most cases, this type of kerning will do nicely. There may be times, however, when you would like to manually adjust the kerning between two characters. (i.e., you may want to create some special effect for the character)s.

« Subscribers: How to Force a Page Break Before a Paragraph
Carol’s Ramblings »